I am Simon, I am English and I live between Roma and Amalfi in Italy. I have lived in Italy since 1990 and I speak reasonable Italian and French, plus some English!!

I love travelling and exploring, I have worked in Export Sales for more than 30 years which has taken me all over the world, and I like nothing better than travelling around Italy and Europe by car, van or motorbike alone or with friends.

I know Italy fairly well and I love to help others to discover the beauty of Italy and to avoid the many pitfalls. Many visitors love Italy but do not really know how to avoid the difficult bits, as the language and the mentality is very different from the American and North European “norms”.

I also have a small fleet of vehicles that I can rent out to the right people or can use to transport you around. You fly into Roma and wanna get to the Amalfi Coast?? I can take you. You need to transport you and/or your luggage around between hotels? Call me. You wanna try a motorcycle experience?? I can supply a touring bike with a satnav in English all ready to go. You wanna visit the Ducati or Ferrari factory?? No problem. You need a route for a 3 day visit to Sicily or Sardinia? I can supply it.

Here follow some blogs to give you a taste of the Italian experience. Thanks!!

I have loved animals ever since I was a kid, as I grew up with dogs plus 2 sisters and generally got on better with the mutts (sorry sis)!!. We had many dogs over the years but the three I remember best were William the boxer, Shambles the border collie mix and Joe the small black poodle who kind of ran the show, despite his size.

I did a paper-round in those days to raise some cash for my numerous motorcycle projects, so each morning they woke me up at 6am ready to head out into the cold and dark UK morning. William usually shared my bed and if he stretched during the night then one of us usually fell out of bed, such was his strength. He never really understood his size and he often tried to climb onto a lap which could never really work, once he leaned on our little Gran and pushed her onto the settee by mistake. What a guy.

Now I live in Italy and this year I spent my summer holiday in stunning Amalfi, on the wonderful Amalfi coast. I took my Yamaha Raptor 700R quad with me and used it to explore the area, almost every day. Well one day I was off road, just exploring an area above Scala when I met three lovely dogs, they kind of greeted me in a very friendly way and they seemed to be telling me that they were rather hungry. As I looked around I could see that they were indeed quite slim (2 out of 3) and they did not appear to have any form of food or water available.

So well I kind of “adopted” them. I guessed that they already had names as they were so friendly that they were not strays so I did not make up any names, but in the countryside the locals keep dogs but perhaps do not feed them every day. So having made friends with all 3 I headed off to the local shops to get some dog food and some aluminium dishes to feed and water them.

I decided that I should not feed them every day as that would perhaps ensure that they gave up any hunting activities as I guessed that they could perhaps catch some mice or other small snacks. So I started to visit them every second day and we became the best of friends. The largest and oldest of the three was obviously the boss but as he is almost blind the other two manage to grab some of his food. But when I gave them everything in a single bowl he would eat about 70%, the black and white guy might get 20% and the runt of the group managed to grab the remaining crumbs.

So I refined my feeding strategy and using 3 bowls placed a good distance apart I managed to get them to share the food rather more equally. And over the 3 weeks of our friendship the runt grew a little as the other guys allowed him to get a bit more of the food, so really it worked quite well. And then one day I met their owner and he proved to be a really nice guy called Antonio and he thanked me profusely for looking after them and he confessed that he sometimes did not come every day so yes, sometimes they got hungry BUT they had plenty of water.

Well that was August. Now I go most weekends to Amalfi and of course I go to see the guys. They are great!!! 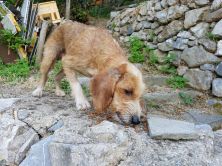 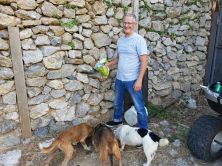 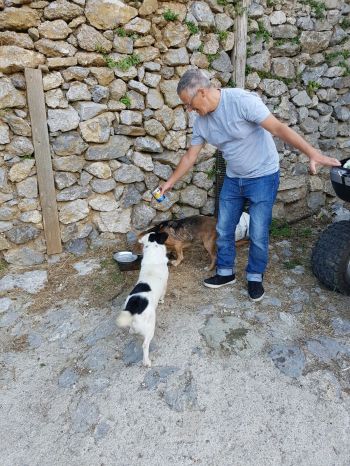